I was tapped by Skyhorse Publishing to write new forewords to three classic magic instruction books, all by esteemed author Jean Hugard. The titles: Royal Road to Card Magic (Jean Hugard and Fred Braue), Mental Magic with Cards, and Modern Magic Manual. It was an honor to be considered for this project. The foreword to the Coin Magic book was written by David Roth.

These books are all available now, online and at major booksellers.

By the way, I am not the cheesy looking dude who appears on these book covers!

Due to a publishing glitch, the foreword for Modern Magic Manual was accidentally replaced by the foreword to Mental Magic with Cards. Skyhorse Publishing will be recalling the misprinted books, destroying all copies, and printing a new edition with the correct foreword. However — there are a large number of misprinted books that have already made their way to libraries, schools, and book distributors. For those readers (who may be confused by the incorrect foreword), here is the full text that you are missing. 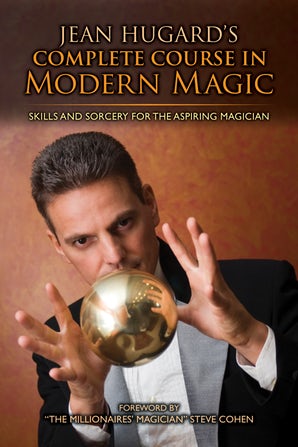 The broad range of knowledge required to become a master magician cannot possibly be contained in a single textbook. If there were a university course for new conjurers – let’s call it Magic 101 – the professor would likely assign a reading list containing a variety of specialized books. Upon examination, students would notice the name “Jean Hugard” pop up multiple times next to the assigned titles. Hugard is highly regarded as one of the most prolific and articulate teachers in the history of magic. He authored nearly thirty books during his lifetime, each focusing on a narrow area of study: cards, coins, thimbles, mental magic, and so on. His Royal Road to Card Magic (co-written with Frederick Braue), in particular, is considered a standard primer for beginners interested in sleight of hand card tricks.

In most cases, magic neophytes are eager to learn a few tricks they can perform in social settings. During Hugard’s lifetime, this genre was known as “pocket tricks” but has more recently been rebranded as “street magic.” In this style, the magician removes a prop from his pocket, performs the trick, and puts it away. If the audience reaction is encouraging, the magician performs a second trick, and then repeats until he either exhausts his repertoire, or the audience becomes exhausted with him… whichever comes first.

For the professional magician, however, magic is more than simply a succession of tricks.  There is a degree of artistry involved in knowing what dictates a good opener, a strong second trick, and a stronger closer. Learning how to structure an act, even a short one lasting only a few minutes, is challenging. There is a well-known expression, “If the only tool you have is a hammer, every problem looks like a nail.” Similarly, if you’ve only studied sleight of hand in relation to card tricks, your range of knowledge is limited to the manipulation of fifty-two pieces of paper. It would behoove you, as a student of magic, to expand your toolkit in order to attain a macro view of what is even possible.

The volume you now hold, Hugard’s Modern Magic Manual, zooms out the telescope lens to provide expert instruction in a wide variety of magic genres. In addition to card and coin sleights, there are tricks with handkerchiefs, rope, flowers, and golf balls. There are close-up tricks with thimbles, rings, and thread, as well as stage tricks that can be performed in front of larger audiences, including the classic Chinese Linking Rings.

Although it is common for new magicians to want to focus exclusively on smaller-scale sleight of hand tricks, I recommend learning two or three routines that “play big.” Once your reputation as a magician starts to grow, you will often be called upon to entertain larger groups of people. If you have only mastered tricks that require an audience to look down at your hands, the people further back will only have a view of the top of your head! This book contains dozens of tricks that allow you to present to people situated both near and far, and to provide larger groups with a robust magical experience.

Modern Magic Manual was first published in 1939, and in the ensuing decades, tricks with cigarettes and cigars have become less popular due to the changing tide of public opinion about the effects of tobacco on health. My advice, however, is to not skip the chapter that teaches cigarette manipulation, as the sleights can be applied to similar-shaped objects, such as crayons or lollipops.  The same advice applies to the chapter describing pocket watch tricks. Modern audiences do not carry pocket watches – many people no longer even wear a wristwatch. Yet the premises introduced in the chapter on pocket watch magic are applicable to other objects. In fact, I performed a variant of one routine (Watch and Loaf) on a national television talk show in England to a rousing response.

Also, do not overlook Chapter I – The Wizard’s Wand.  Even if you never perform the tricks described, consider using a wand, or similar object, to assist in concealing an item in your hand. Holding a wand gives you a logical reason to keep your hand closed when an object is hidden inside. Psychologically, people cannot conceive that you can hold two items in the same hand.

The wand is an indispensible tool that is built into the very infrastructure of the Cups and Balls (described in Chapter V). There are multiple moments in this trick when the wand covers a multitude of concealments and secret loads. If you do not own a wand, feel free to substitute a spoon, a pencil, or even the cross rod of a wooden hanger. In a pinch, any of these objects can serve the same purpose as a wand. Personally, I am a fan of the Coffee Cups and Balls described in Chapter V, as this follows the impromptu nature of Max Malini’s famous performances. Malini borrowed three coffee cups, acquired some cherries from the bar (in lieu of balls), and used a celery stalk as his wand. The apparently extemporaneous use of natural objects is extremely disarming, and makes the final appearance of large fruits that completely fill each cup even more surprising.

Chapter VIII offers valuable lessons in Silks and Sorcery, a genre of magic that no longer enjoys the same popularity as in decades past. Within the trade, magicians call handkerchiefs “silks,” and tricks with silks take advantage of their flowing, visual nature, as well as their ease in compressing into small spaces. Ade Duval, a famous magician at the time this book was released, played in the world’s most celebrated theaters (including Radio City Music Hall and the London Palladium) with an all-silk act titled “Rhapsody in Silk.” He produced thousands of colorful silks both from empty tubes and from his bare hands, ultimately filling the stage with swirling, jubilant silk banners. While other magicians were plagued with imitators, Ade Duval’s silk act was never duplicated. The reason?  Probably because it took him one and a half hours to prepare the silks before every twelve-minute performance! If you want to try your hand at silks, Chapter VIII teaches the special folds and pleats that enable you to unfurl one, or a dozen, in an eye-pleasing production.

You will also learn some great knot tricks, including Upsetting a Square Knot.  This is the basis of Slydini’s famous silk routine, which he performed brilliantly on the Dick Cavett Show in 1977. We are fortunate to have a recording of that broadcast preserved on the New York Times website. An internet search for “Slydini” and “Dick Cavett” will guide you to this masterful performance. Slydini expanded upon the simple sleight described by Hugard, transforming a potentially trivial trick into a full-fledged and genuinely baffling routine that is worthy of your study.

If you are inclined to learn card magic, Chapter XVII offers a solid roundup of effective sleights and tricks. The first nine pages of this chapter are devoted to shuffles– the overhand shuffle, riffle shuffle, and the Hindu shuffle. I recommend that you study Hugard’s description of the false overhand shuffle subtitled: To retain the whole deck in a set order. I use a version of this false shuffle in my performances, and the method described in this chapter is both easy to learn and utterly deceptive. Your audience will believe that you have shuffled the deck, while in fact not a single card has changed position.

Hugard reveals an intriguing bit of trivia: he himself coined the term “Hindu shuffle” after seeing an Indian magician in Australia execute this style of shuffle, common to the people of India and East Asia. Hugard’s coinage of the “Hindu shuffle” has been adopted by professional magicians worldwide ever since. In most western countries, however, the more prevalent method of mixing cards in casual gaming is the overhand shuffle.

One of the first bits of advice I received as a beginner is that you only need to know three sleights: a pass, a palm, and a force. By combining these three maneuvers, you will have the ability to perform a wide variety of entertaining card tricks. Chapter XVII offers solid, workable methods in each of these categories, as well as fully formulated routines that build upon the sleights you have just learned. For further study, I recommend Hugard and Braue’s Royal Road to Card Magic and Hugard’s Encyclopedia of Card Tricks.

As a veteran magician, I want to remind new students that you do not need to learn every version of every sleight. Young magicians often pride themselves on the sheer number of moves they can do, the more difficult the better. Their skill serves as a badge of honor, and fellow magicians reinforce this notion by praising flawless execution of challenging sleights. If you know twenty-five methods to control a selected card, however, yet only one method to reveal it, audiences will believe you know only one trick. On the flip side, if you know one method to control a selected card, and twenty-five methods to reveal it, your audience will believe you know twenty-five different tricks. Pay attention to the various discoveries taught in Chapter XVII, including a pleasing sequence contributed by legendary magician and mentalist, Theodore Annemann.

When I began learning magic forty years ago, I loved multi-subject books like this. Between two covers lay a goldmine of tricks using cards, coins, rope, linking rings – all items I dreamed about performing on stage one day. Two more favorites, similar in scope, are Henry Hay’s The Amateur Magician’s Handbook and John Northern Hilliard’s Greater Magic. Each of these volumes felt like a Sears catalog of magic, heavy books describing hundreds of attractive and peculiar sleights, and I felt compelled to learn them all. If you are a new magician, I envy you. You are about to embark on a journey of exploration that can inspire a lifelong love of magic.